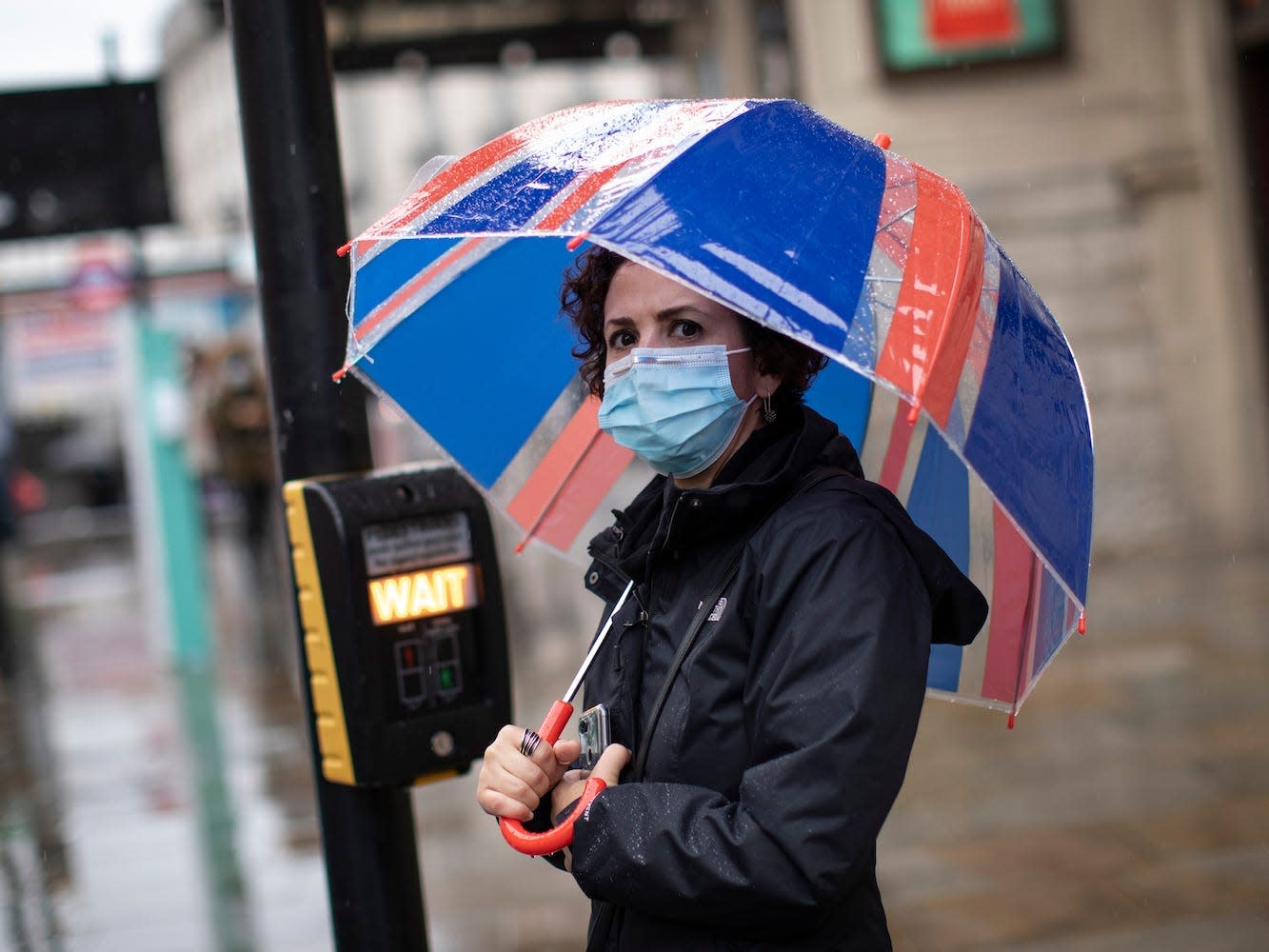 A woman stands a crosswalk in London, England, on October 15, 2020. Dan Kitwood/Getty Images

The surest way to boost the chances of a worrisome coronavirus mutation: let it spread unchecked.

When viruses infect a body, they replicate. More spread means more replication, which raises the likelihood of genetic errors. So in places where transmission is high, we are more likely to see a harmful variant emerge, experts say.

That may be what happened in the UK.

UK Health Secretary Matt Hancock announced in early December that a new coronavirus strain was responsible for an uptick in cases in the south of England. The variant quickly overtook all other versions of the virus in the country, he said. By December 9, six out of every 10 new coronavirus cases in the UK were the new variant.

A preliminary study suggests the strain is about 56% more contagious than the original virus that emerged in China.

Researchers first detected the variant three months ago in the London area, after a second wave of late-summer infections started. The variant was found just weeks after the UK reported 2,988 cases on September 6 – its highest daily record since late May.

Until mid-December, London was in the second-lightest tier of coronavirus lockdowns, which allowed pubs to remain open and limited spectators at sporting events and performances.

“Virus mutations can only accumulate if the virus is allowed to be transmitted. So the longer that we allow uncontrolled transmission to occur, the more chances that the virus will have to adapt to human transmission,” Nathan Grubaugh, an epidemiologist at the Yale School of Medicine, told Business Insider.

Countless versions of the coronavirus are circulating, each separated by a handful of tiny changes in its genetic code. The virus typically accumulates two mutations a month, many of which “have no real public-health impact,” Grubaugh said.

Most of the mutations don’t affect the virus’s infectiousness or deadliness, according to Lucy van Dorp, a researcher at University College London’s Genetics Institute.

But every so often, she told Business Insider, “a mutation, or combination of mutations, can arise which confers an advantage to the virus in some way.”

That’s the case with the new UK strain, which geneticists have named B.1.1.7. It collected at least 17 mutations at once. Experts believe the strain could have emerged in a patient who was infected for a long time, allowing the virus to mutate in their body, Science magazine reported.

Some of the strain’s mutations affect the virus’ spike protein, which it uses to invade cells. That could make it easier for the virus to infect people. It’s also possible that people infected with the new strain have higher viral loads, meaning they produce more viral particles that can infect others when they’re sick.

An illustration of the new coronavirus, SARS-CoV-2, which causes COVID-19. CDC

Either way, “the working hypothesis is that the variant increases the chances of infection upon exposure,” Grubaugh said.

Between mid-November and mid-December, the variant jumped from being responsible for 28% of London’s cases to 62%.

South Africa, too, is dealing with a new coronavirus strain that seems to be more transmissible and shares one mutation related to the spike protein with the UK strain. Neither strain seems to be more deadly, though a more contagious strain spreading widely could cause more total deaths than a deadlier strain.

Virologists also think vaccines will still be effective against B.1.1.7, though there are some concerns that vaccines may not work quite as well against the variant detected in South Africa.

‘The more replication, the more opportunities for evolution’Masked travelers on a London Underground platform, September 24, 2020. Getty

From June to September, the entire UK was put in the middle tier of its COVID alert level system. Restrictions were eased: Bars and gyms opened in July, and more than 100 million discounted meals were served to indoor diners in August via the government’s Eat Out to Help Out plan to stimulate the restaurant sector.

But that reopening may have happened too quickly. One researcher estimated Eat Out to Help Out was linked to almost 20% of all new UK infection clusters in August. London, where new daily cases were in the dozens in July, saw that figure spike to more than 1,000 by the start of October. Summer days with record lows of just 400 to 500 new cases in the UK gave way to daily fall totals of 4,000 to 5,000 new infections.

Neher added, though, that it’s hard to predict what prompts a virus to evolve and when particular mutations will arise. So “the chance of this happening might not be exactly proportional to the number of cases,” he said.

Human behavior has a large effect on transmission rates

The B.1.1.7 variant has an increased reproductive, or R0, value – the average number of people one sick person infects – of 1.5 rather than 1.1, the World Health Organization announced in December. That difference of 0.4 means 100 sick people will infect another 150, not 110, on average.

“However, that does not mean that it is responsible for the rising cases in London and the surrounding area,” Doron said. She emphasized that mitigation measures like strict social distancing and masking play a big role, too.

“Human behavior has a very large effect on transmission – probably much larger than any biological differences in SARS-CoV-2 variants,” Paul Bieniasz, a virologist at the Howard Hughes Medical Institute, previously told Business Insider.

So far, the variant doesn’t appear to jump between people any differently than the original virus, and there’s not yet any indication that existing personal protective equipment would be insufficient to stop its spread.

At least 27 countries blocked travel from the UK in mid-December following its government’s announcement about its new strain’s increased transmissibility. But it was already too late.

Genetics data reveal the strain is now present in at least 33 countries, including the US. In the last nine days, more than 50 cases involving B.1.1.7 were reported in six states: California, Colorado, Florida, Georgia, New York, and Texas.

None of the infected people had recently traveled outside the US, which means the variant is clearly “circulating in our community now,” Charles Chiu, an infectious-disease expert at the University of California, San Francisco, told Business Insider.

Chiu thinks B.1.1.7 has been in the US since early December, and said “it’s very likely that it’s in every state.”

So “the mutation could be more widespread and we just don’t know it,” Grubaugh said.

People on the London Underground on September 25, 2020. Aaron Chown/PA Images via Getty Images

This probably won’t be the last time we learn of a new, potentially more infectious strain.

“Have there been others? Possibly, and maybe they didn’t perpetuate for some reason,” Grubaugh said. “Will there be others in the future? Likely.”

Don't Miss it What to say to a pal who’s skeptical of getting the coronavirus vaccine
Up Next Coronavirus gene mutation: How scared ought to we be? | Covid-19 Particular