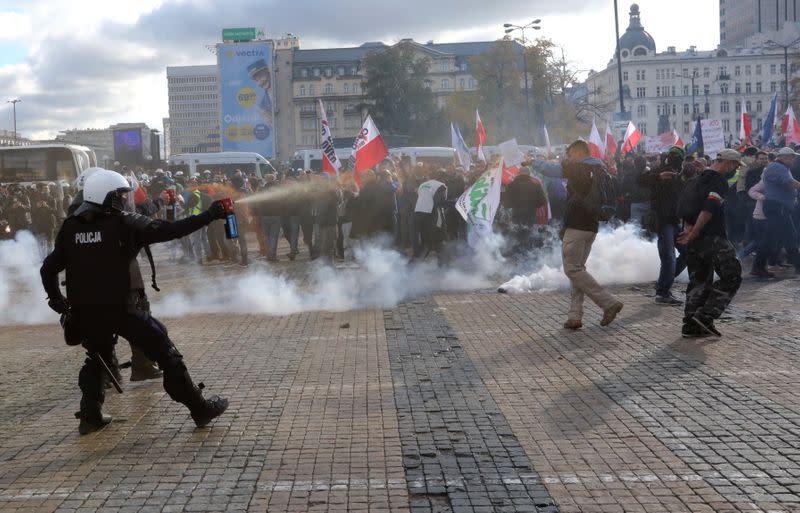 WARSAW (Reuters) – Warsaw police detained 278 people on Saturday after thousands protested against new curbs aimed at containing the spread of the coronavirus, a police spokesman said.

Police said demonstrators had attacked policemen, throwing stones, glass bottles and fire crackers during the demonstrations. Police used tear gas on several occasions during the protests in Warsaw in which people demanded that new restrictions be repealed.

“We have 278 detainees. … We were dealing with a clear manifestation of aggression, these people came to fight us,” Warsaw police spokesman Sylwester Marczak told reporters on Sunday.

The demonstrations also broke a ban on gatherings of more than five people, which came into effect on Saturday as part of new measures to contain the spread of the coronavirus.

Poland is seeing a sharp rise in COVID-19 cases, with new infections on Friday hitting a daily record of 13,632.

The head of the Polish Football Association, 1980s soccer star Zbigniew Boniek, tweeted on Sunday that he was infected with COVID-19, a day after Polish President Andrzej Duda tested positive for the disease.

New curbs imposed on Saturday include a two-week shutdown of restaurants and bars. Schools will remain open for children up to third grade, with older students moving to distance learning. Older people can leave their homes only in special cases.

Despite the ban on gatherings, Poland also separately continued to see demonstrations on Saturday against a ruling on Thursday by the Constitutional Tribunal that imposes a near-total ban on abortion in the Catholic country.

On Sunday activists have said they plan to gather in front of churches across the country, holding banners depicting crucified pregnant women.

Recent opinion polls have also shown a drop in support for the ruling nationalist Law and Justice (PiS) party.

It has faced criticism in recent days from the opposition that the country is not sufficiently prepared for a second wave of the virus and over the anti-abortion ruling.

PiS lawmakers welcomed the Constitutional Tribunal’s decision on Thursday but rejected accusations by the opposition that the PiS had influenced it.

Don't Miss it Spain declares state of emergency over coronavirus as Italy closes cinemas, theatres and gymnasiums
Up Next Miami nurse sues physician colleague, says he ‘intentionally’ contaminated her with COVID-19