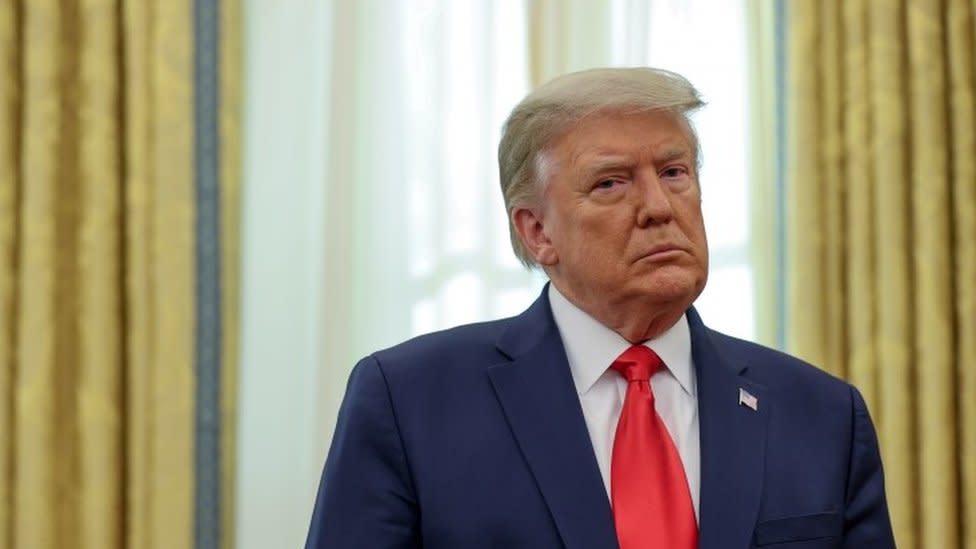 US President Trump has urged Congress to amend a bumper coronavirus stimulus bill to increase stimulus payments to $2,000 (£1,500) per American.

In a video message posted on Twitter, he asked lawmakers to “remove wasteful and unnecessary items”, adding that the package “really is a disgrace”.

“It’s called the Covid relief bill, but it has almost nothing to do with Covid,” he said.

The $900bn bill includes one-off $600 payments to most Americans.

On Tuesday, President-elect Joseph Biden said the coronavirus bill was a merely “down payment” and vowed he would press lawmakers to pass another stimulus bill after he enters office next month.

“Congress did its job this week,” the Democrat said, speaking from his hometown of Wilmington, Delaware, “and I can and I must ask them to do it again next year.”

Mr Trump, who leaves office on 20 January, had been expected to sign the sprawling legislation into law following its passage through Congress on Monday night.

But in Tuesday night’s message from the White House, the Republican president baulked at spending in the bill on other countries, arguing that the money should go to struggling Americans.

He said: “Congress found plenty of money for foreign countries, lobbyists and special interests, while sending the bare minimum to the American people who need it. It wasn’t their fault. It was China’s fault.

“I’m also asking Congress to immediately get rid of the wasteful and unnecessary items from this legislation and to send me a suitable bill, or else the next administration will have to deliver a Covid relief package.”

Republicans and Democrats have been negotiating a coronavirus stimulus bill since July.

On Monday afternoon, congressional leaders unveiled the 5,593-page package and voted on it several hours later.

Several lawmakers protested that they had not been given an opportunity to read the contents.

Nevertheless the bill sailed through the House of Representatives by 359-53 and the Senate by 92-6.

The relief package contains a number of provisions that will help tens of millions of Americans struggling to make ends meet in the pandemic-battered economy.

The one-off payments of $600 are half the amount provided by the last major coronavirus aid bill in March, which contained $2.4tn in economic relief.

Monday’s package extends federal jobless benefits of up to $300 per week for 11 weeks, although this again is half the amount provided by the previous bill.

The package contains $25bn in rental aid and extends an eviction moratorium that was due to expire at the end of this month, a lifeline for millions of Americans.

The bill also bans surprise medical billing – where hospital patients get slapped with often exorbitant stealth fees because they were treated by a doctor who was not covered by their health insurer.

But after poring over the mammoth legislation, journalists and critics have highlighted alleged giveaways for lobbyists.

The Washington Post reports that the package contains $110bn in tax breaks for sectors such as the liquor industry and motorsports entertainment.