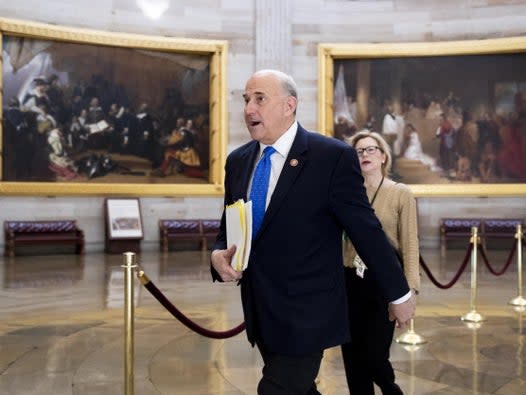 A Texas Republican who tested positive for Covid-19 wrongly suggested he may have contracted the novel coronavirus by wearing a face mask — and said he would be taking an unproven treatment touted by Donald Trump.

Louie Gohmert (R—Tx) tested positive on Wednesday during a White House procedural screening just before he was set to fly with the president to Texas on Air Force One.

The congressman said in a video posted to social media: “When I have a mask on, I’m moving it to make it comfortable, and I can’t help but wonder if that put some germs in the mask.”

Leading infectious disease experts and global health guidances have recommended wearing a face mask amid the coronavirus pandemic to help prevent a spread of the novel virus, though some conservatives and allies of the president have rejected the recommendations on Capitol Hill.

Mr Gohmert was among several Republican lawmakers who have refused to wear masks in Congress throughout recent weeks, as a growing list of elected officials tested positive for Covid-19.

On Wednesday night, Mr Gohmert said he would begin taking an anti-malaria drug called hydroxychloroquine in order to combat the virus — despite experts and a growing pool of research suggesting the medicine does not help treat the coronavirus.

“My doctor and I are all-in,” the Republican reportedly told Fox News. “I got a text before I came on from a friend doctor who just found out he had it, and he started the regimen too — zinc and hydroxychloroquine. And that will start in a day or two, so thank you.”

The treatment, which has not been proven by leading scientific institutions, was also recommended by a doctor named Stella Immanuel, who has gained prominence on right-wing corners of the web, and was later retweeted by the president. That doctor has made bizarre, unfounded and non-scientific statements about everything from demons to aliens. Dr Immanuel, a religious minister from Houston, Texas, has made claims about people having sex with demons and witches, alleging alien DNA has been used in medical treatments and asserting that vaccinations were being developed to stop people from being religious.

Mr Trump has continued to promote the anti-malaria drug as an effective treatment, even claiming he himself took the drug as an apparent form of prevention against the coronavirus.

Before testing positive for Covid-19, My Gohmert attended the blockbuster congressional hearing with Attorney General William Barr, where he was seen without a mask on multiple occasions.

Controversial views of doctor who got Trump Jr suspended from Twitter

Gohmert did not go to gym after coronavirus test, Democrat claries

Republican tests positive for Covid-19 after refusing to wear mask