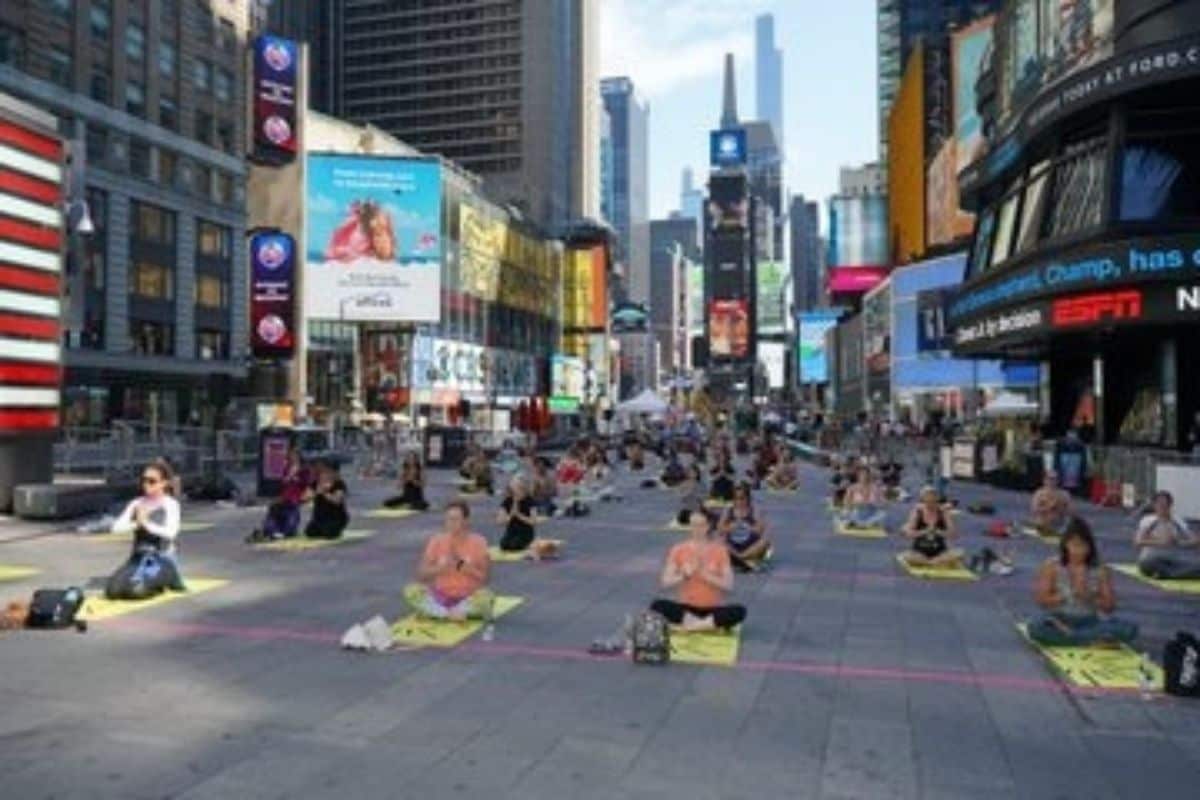 Rising from the pall of Covid-19 restrictions, New York City celebrated International Yoga Day at the Times Square with day-long performances of the ancient Indian art of developing a healthy mind and body. The city’s celebrations were held on Sunday to coincide with the Summer Solstice, which falls a day early this year, but the UN is scheduled to observe the day virtually on Monday.

The UN General Assembly declared June 21 the International Day of Yoga in 2014 at the initiative of India with the support of 177 countries. More than 3,000 people participated in the “Mind Over Madness Yoga” performances organised by the Indian Consulate General and the Times Square Alliance.

“While we celebrate yoga in various parts of the world, celebrating yoga here in Times Square is very special, very unique, more so today when it happens to be Father’s Day, what a happy coincidence.”

Times Square Alliance President Tom Harris said yoga is about “health, harmony, unity and togetherness”. New York State had dropped most Covid-19 restrictions on June 15 and Yoga Day was the first major event at Times Square. “We are back. Now is the time to stop wishing and doing more,” Harris added.

The relay of yoga exercises that began at 7.30 a.m. and continued till 8 p.m.. It was broadcast live on the internet to help those at home learn the art.

The day has been observed at the UN with top officials joining in the mass exercises, except last year and this year because of the pandemic. On Monday, the UN is scheduled to hold a virtual event at 8.30 a.m. (6 p.m. Indian Standard Time) that be telecast over UN TV, which is available on the internet, and on the Indian Mission’s social media.

General Assembly President Volkan Bozkir will deliver a message at the event and New York yoga teacher Eddie Stern is slated to give a demonstration.

A Saudi yoga instructor, Nouf Marwaai; an Indian doctor and author, Raman Krishnan, and Sam Rudra Swartz, a disciple of Swami Sachidananda and a hatha yoga teacher are to participate in an interactive dialogue on “Yoga and Wellbeing”.

Don't Miss it Latin America's COVID-19 state of affairs stays devastating | DW Information
Up Next Coronavirus in India: Why did the pandemic spiral uncontrolled? | To the Level