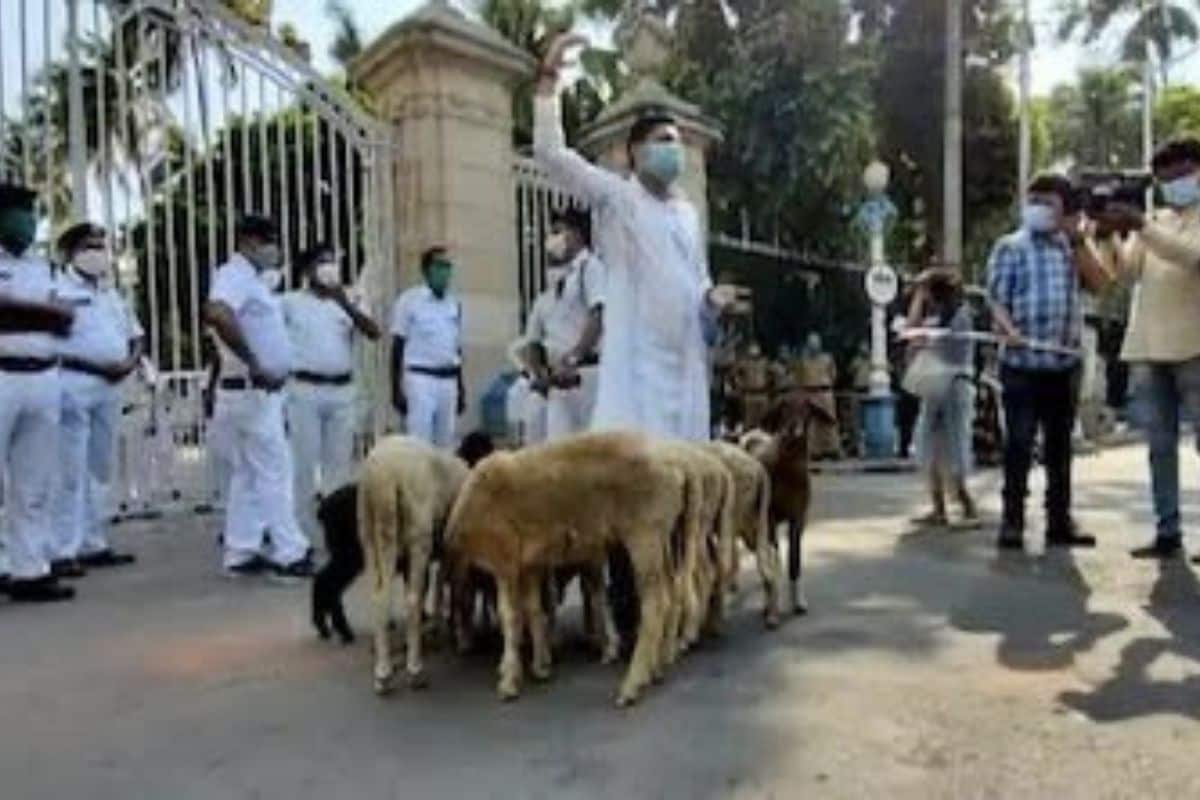 In an unusual protest against the alleged lack of concern by those occupying high posts about the worsening coronavirus situation in West Bengal, a social organisation, on Tuesday, herded a flock of sheep in front of Raj Bhavan in Kolkata. A spokesperson of the Kolkata Nagarik Mancha accompanied shepherds who took the animals near the North Gate of the Governor House. They remained there for around five to seven minutes before policemen, who were initially bewildered, drove the agitators and the sheep away from the high-security area.

Incidentally, Tuesday was the birthday of Governor Jagdeep Dhankhar.

The Mancha spokesperson said the organisation resorted to such a mode of protest as a gathering of people is not allowed during the pandemic and prohibitory orders are in force in the area. The herd consisted of eight sheep, of which six were white and two black, and was brought by a man dressed in kurta and jeans.

“There is oxygen scarcity in the state, COVID-19 patients are not getting beds, people are dying. But we have not seen him (Governor Jagdeep Dhankhar) coming in support of people reeling under the coronavirus blow,” the spokesperson said.

The governor is flagging other issues but not the “grave CCOVID-19 situation”, he claimed.

The Kolkata Nagarik Mancha has no link with any political party, the spokesperson said.

The bizarre protests come at a time when the Central Bureau of Investigation (CBI) has arrested members of the ruling Trinamool Congress in the Narada scam case.

Reacting to the incident, the Governor took to Twitter to lash out against the state’s law and orders. He even hit out at Kolkata Police for not taking any action against the man, who brought the sheep.

State of law and order ⁦@MamataOfficial⁩ even at the main entry gate of Raj Bhawan worrisome with stance police ⁦@KolkataPolice⁩ leaving all to be desired. And all this when the area is subject to 144 CrPC prohibitory orders.

Constrained to seek an update on it. pic.twitter.com/HIiD7bTf67

Reacting to the incident, senior BJP leader Anupam Hazra said, “Such distasteful conduct against the first citizen of the state outside Raj Bhavan only showed Bengal in poor light.”

Ruling Trinamool Congress spokesperson Kunal Ghosh said that the party has no idea who was behind this agitation or what prompted them to resort to such an act. “We will ask everyone to exercise restraint and keep cool and not do anything which will violate coronavirus safety guidelines,” Ghosh said.

(with inputs from PTI)