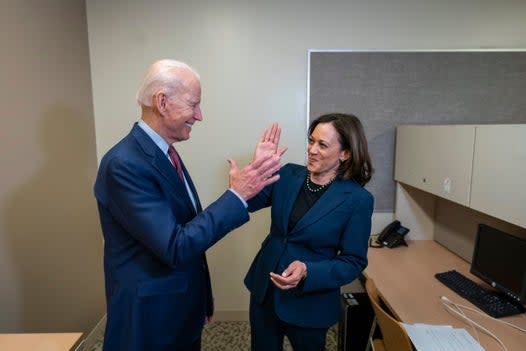 An undated handout photo made available by the Biden Harris Campaign shows former US Vice President and presumptive Democratic candidate for President Joe Biden with California Senator Kamala Harris, released after the campaign announced that Biden has chosen Kamala Harris as his vice presidential running mate on 10 August, 2020: EPA

Joe Biden said he would not hesitate to shut down the country again if scientists recommended the measure to stop the spread of the coronavirus.

In his first joint interview with running mate Kamala Harris, the Democratic nominee criticised his opponent Donald Trump’s rush to reopen after a nationwide lockdown as a “fundamental flaw” in his handling of the pandemic.

“I would shut it down; I would listen to the scientists,” Mr Biden told ABC, when asked how he would respond if experts recommended it.

“I would be prepared to do whatever it takes to save lives. Because we cannot get the country moving until we control the virus. That is the fundamental flaw of this administration’s thinking to begin with,” he added.

More than 175,000 Americans have died from Covid-19 since the pandemic began — the highest number of deaths anywhere in the world. It also has the most confirmed cases, at more than 5.6 million.

After playing down the threat of the pandemic when it first arrived in the US, the Trump administration moved quickly to reopen areas across the country in order to prevent economic damage.

Mr Trump famously said “we cannot let the cure be worse than the problem itself,” in reference to the economic impact the shutdown had caused.

Many states who rushed to reopen are now facing surges of cases again. Georgia, Florida and Texas were among the first to reopen, now they are leading the country in the number of new cases per capita.

Mr Biden said beating the virus was the only way to get the economy moving again.

“In order to keep the country running and moving and the economy growing, and people employed, you have to fix the virus, you have to deal with the virus,” he said.

ABC released excerpts of the interview on Friday, ahead of its broadcast on Sunday.

Mr Biden’s comments were followed a day later by an unsubstantiated claim by president Trump that the “deep state” is delaying a coronavirus vaccine until after the election.

“The deep state, or whoever, over at the FDA is making it very difficult for drug companies to get people in order to test the vaccines and therapeutics,” he wrote on Twitter on Saturday morning.

“Obviously, they are hoping to delay the answer until after November 3rd. Must focus on speed, and saving lives!”

The head of the Food and Drug Administration, Dr Stephen Hahn, was nominated by Mr Trump for the role in 2019.

Don't Miss it 20 Pack – Disposable Face Masks for Residence, Workplace, or on The Go – Snug & Breathable
Up Next COVID-19 would not appear to be all over the place but. Listed here are 14 international locations that say they have not had a single coronavirus case.