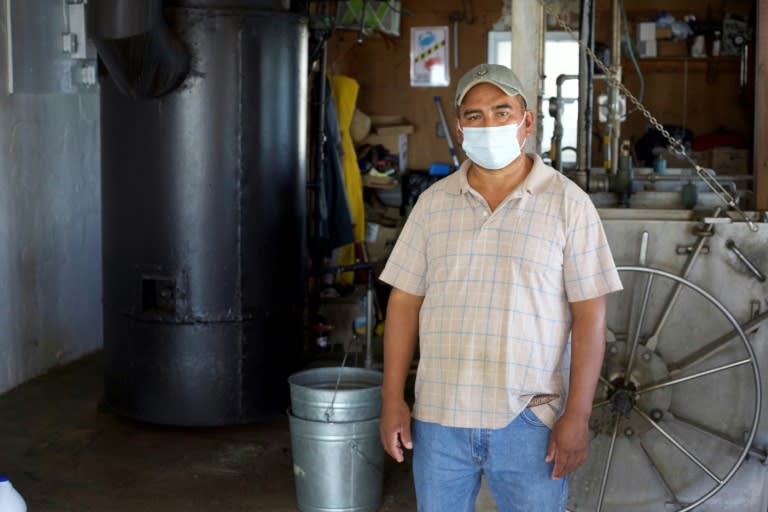 As crab season arrived in Hoopersville, Maryland, locals began asking where Jose Bronero Cruz was. For two decades, he’d traveled from Mexico to the remote town to pick crab meat, but this spring, he did not arrive.

Nor did any of the other foreign workers Janet Rippons-Ruark relies on to process meat from the blue crabs Maryland is famous for, exacerbating a worker shortage that ballooned into a crisis for the eastern US state’s iconic industry.

“We’ve survived Covid. But we’re in an area where there is just not local help,” Rippons-Ruark said.

A shortage of visas for foreign workers combined with disruptions caused by the coronavirus pandemic paralyzed parts of Maryland’s crab industry this year, forcing two-thirds of the major seafood processors to scrape by on the few employees they could find, or close entirely.

A batch of visas issued at the start of October finally allowed Cruz and other guest workers to enter the country, but amid the prolonged deadlock over immigration policy in Washington that shows no sign of abating soon, crab industry leaders fret for their future.

“Whether we’ll survive the staffing thing… That remains to be seen,” said Jack Brooks, president of the Chesapeake Bay Seafood Industries Association.

Blue crabs pulled from the waters of the Chesapeake Bay are perhaps Maryland’s best-known export, with the state the second-largest producer of the 2018 US harvest valued at $188.4 million, according to the National Oceanic and Atmospheric Administration.

The industry is at the mercy of weather — as well as regulations intended to protect crab habitats, but processors can also enjoy booms during years like 2020, when prices rose as the pandemic’s arrival seemed to increase crab’s popularity.

“We’re not in what you call a growth industry at this point, but we do have a domestic product that a lot of people want,” Brooks said.

Less desirable is the work of processing crab, which involves steaming them, cracking open their shell, removing their gills and picking out the meat for sale — a job industry leaders say few Americans want to do, particularly since workers are employed for only part of the year.

Processors rely on guest workers from Mexico and elsewhere in Latin America entering on temporary H-2B visas to extract the crabs, though migrant rights groups have also accused the industry of giving workers poor housing and insufficient health care access.

For Cruz, journeying all the way from Tabasco state in southern Mexico to Hoopersville, located on a dead-end road so low-lying that waves splash onto it, is better than trying to find work back home.

US law allows 66,000 H-2B visas to be issued each year and Brooks said the Maryland crab industry needs only around 450, but in the face of competition from industries such as forestry and landscaping, even getting those is tough.

More than 99,000 requests for visas were received at the start of 2020, according to the Department of Labor.

But Brooks said a change in the procedure for allocating the visas caused disaster when only three processors were given the authorizations they needed as the season began in April.

The government in March said it would give out 35,000 more visas, but the plan was abandoned when the pandemic descended.

That meant for the six months until the next batch of visas were given in October, six plants had to make due with what workers they could find, and some closed.

“We want it fixed,” said Rippons-Ruark, who sold only live crabs until her workers arrived, and is now scrambling to fill orders for meat in the season’s two remaining months. “It’s hard being in business with no permanent solution.”

Overhauling the US immigration system has been discussed for years but no proposal has made it through Congress, and as the November elections approach, processors are skeptical that President Donald Trump would relieve the visa shortage if given a second term.

Nor do they expect changes should his challenger, former vice president Joe Biden, unseat him.

“Biden was there all those years. He did nothing to help the situation,” said Jay Newcomb, president of the county council who also owns a crab business, adding that under Trump, “nothing has gotten done.”

Joe Spurry has managed to keep his business, Bay Hundred Seafood, staffed by bussing in workers from a distant Washington suburb.

But the group he’s employed for years is nearing retirement, and Spurry has resigned himself to soon applying for H-2B visas.

“It’s not the business that’s holding us up,” he said. “It’s the labor force.”