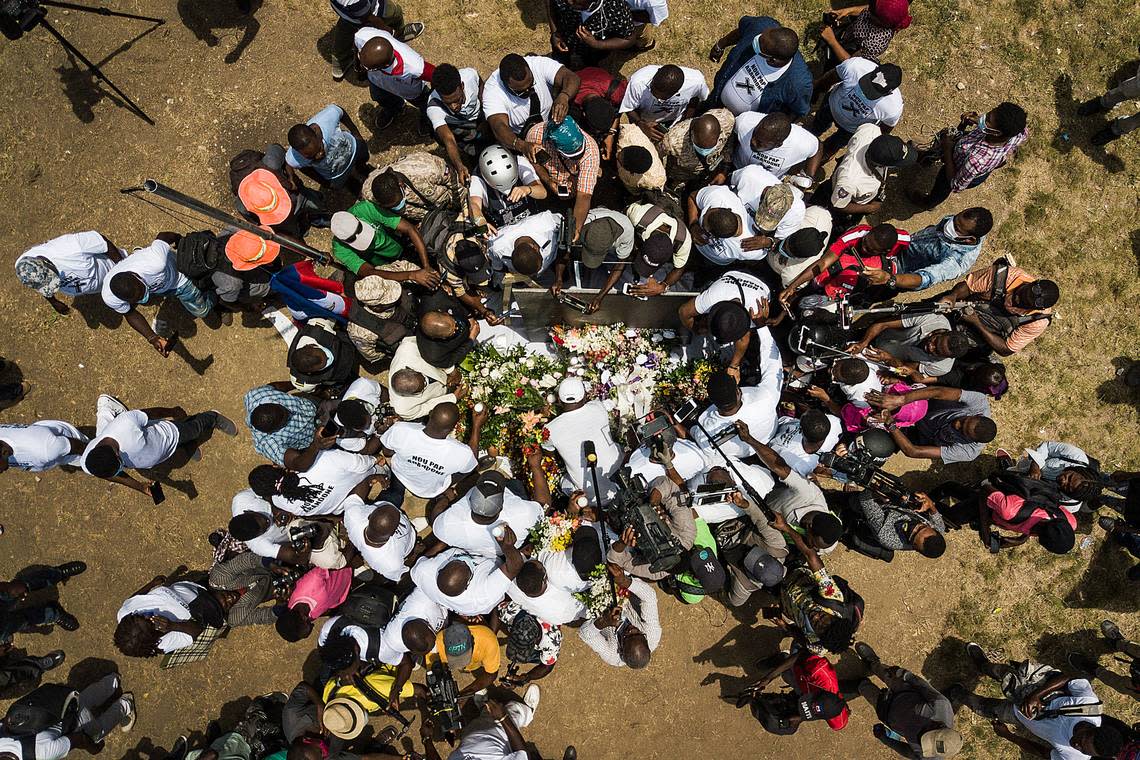 The Biden administration delivered 500,000 doses of Moderna COVID-19 vaccines to Haiti on Wednesday, hoping to provide relief to the Caribbean nation roiled by the coronavirus pandemic and an ongoing political crisis.

Haiti was the only country in Latin America and the Caribbean — and one of five in the world, according to the World Health Organization — where the government had not yet administered one jab of a COVID-19 vaccine.

Officials with the Biden administration and the Pan American Health Organization said the shipment arrived in Haiti at a facility run by COVAX, an international organization working to guarantee access to coronavirus vaccines.

“Today, thanks to the U.S. commitment to playing a leading role in ending the pandemic everywhere, 500,000 doses of Moderna arrived in Haiti from the United States,” a White House official told McClatchy. “The United States will send a significant amount of additional doses to Haiti soon.”

After seemingly dodging the worst of the disease last year, new cases and deaths began to surge in May, adding to an already complex political, socio-economic and humanitarian crisis.

Haiti was thrown into political turmoil after the assassination of its president, Jovenel Moïse, last week.

While the number of cases is low compared to elsewhere in Latin America and the Caribbean, experts say they are an undercount.

The lack of treatment centers for the coronavirus, coupled with a surge in gang violence and the humanitarian crisis, threatens to overwhelm an already fragile healthcare system. There are only a few hundred beds in the entire country to treat COVID-19, and hospitals with beds have had to stop taking patients either because of the lack of beds or oxygen, or the gangs.

Since June 1, more than 16,000 Haitians have been forcefully displaced from their homes in poor neighborhoods of Port-au-Prince because of violent gang clashes. Dr. Carissa Etienne, the head of PAHO, on Wednesday noted that the displacements on top of the other challenges are a concern.

“We are concerned about Haiti, which, in the midst of considerable political turmoil, has seen thousands of people displaced by growing violence and instability, and crowded shelters could become active hot spots for COVID transmission,” Etienne told regional journalists during PAHO’s weekly update on the situation with COVID-19 in the region.

Limited hospital supplies and violence are also hindering the ability of health workers to safely care for patients, she said. “In some cases, patients may be avoiding seeking care due to safety concerns.”

After raising concerns about the AstraZeneca vaccine, which delayed shipments, Haiti’s government authorized the import of vaccines in May just as cases began to surge.

The acting government now faces the difficult task of convincing Haitians to get vaccinated. Despite the confirmation of two variants of the disease, many Haitians still question the pandemic. The Moderna vaccine is a two-dose regimen.

“The arrival of these vaccines is quite promising and now the challenge is to get them to the people that need them the most,” Etienne said.

The donation is part of the U.S. government’s plans to increase COVID-19 vaccination coverage around the world, counter new waves of infection, and prioritize vaccination of healthcare workers and other vulnerable populations in neighboring countries.

The Biden administration has committed to providing 80 million U.S. doses around the globe.

Of that, 14 million doses have been earmarked for Latin America and the Caribbean through COVAX, the United Nations-led effort.

“This first allocation of vaccines puts an end to a long period of waiting,” Dr. Marie Gréta Roy Clément, Haiti’s Minister of Public Health and Population, said. “Not only for the Haitian population but also for the people of the region who were very concerned that Haiti was the only country in the Americas that had not yet introduced the COVID-19 vaccine.”

“Scientific teams and legal and regulatory authorities from both countries have worked together to ensure the prompt delivery of safe and effective vaccine lots to Haiti,” the White House official said.

In addition to the United States, the governments of Spain, Canada and others have donated vaccines and other support for Latin America and the Caribbean. PAHO continues calling on more developed countries to help expand access to vaccines for the region.

So far, close to 26 million doses of COVID-19 vaccines have been delivered to 31 countries in Latin America and the Caribbean through COVAX. However, only about 14% of the total population in the Caribbean and Latin America has completed their vaccination schedule, and some countries have not yet been able to vaccinate more than 1% of their population.