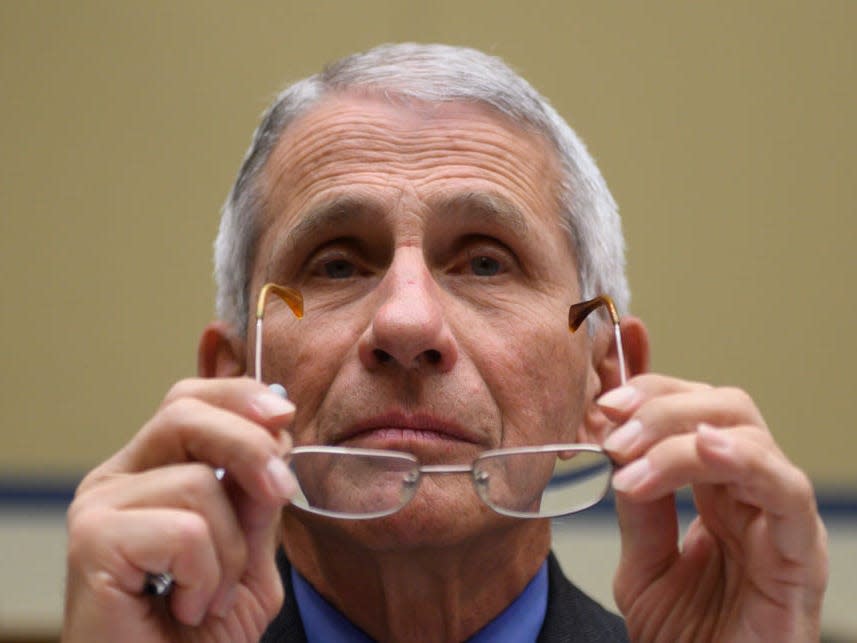 Dr. Anthony Fauci, the top US infectious-disease expert, has said a coronavirus vaccine for the US probably won’t be ready before the November presidential election.

Those remarks contrasted with President Donald Trump’s strong suggestions that a vaccine might be ready by November 3.

Speaking at the Research America Virtual National Health Research Forum on Tuesday, Fauci said “it’s not impossible” that a vaccine would be approved by that time but added “it’s unlikely that we’ll have a definitive answer.”

Speculation about the timeline for a vaccine’s approval has increased since the US Centers for Disease Control and Prevention was found to have recently sent a letter to governors asking that states make logistical preparations to be able to distribute a vaccine by November 1 — two days before in-person voting.

Trump had long suggested a vaccine would be deemed safe and effective this year, but more recently the president has hinted one might be ready before the presidential election, telling reporters on Monday: “We’re going to have a vaccine very soon. Maybe even before a special date. You know what date I’m talking about.”

Insiders to Operation Warp Speed, the Trump administration’s effort to support vaccine development, have expressed concerns that the process is being overly pressured to fit the election timetable. The White House denies this is the case.

According to The New York Times, a preelection vaccine has been referred to as “The Holy Grail” by those on Trump’s campaign team.

The Democratic presidential nominee, Joe Biden, and his running mate, Sen. Kamala Harris, issued a joint statement Tuesday asking Trump to publicly commit to being guided by science, rather than politics, in the race to develop a vaccine.

There are 176 efforts to develop a vaccine worldwide, according to the World Health Organization.

At the Tuesday conference, Fauci explained the rationale behind his end-of-year timing estimate.

The government is helping the development of six to seven vaccine candidates, he said, with three of those already in late-stage trials.

Two of those three are expected to have enough volunteers for their phase 3 trials by the end of September, Fauci said.

These vaccines use a so-called prime-and-boost method, which consist of a first dose followed 28 or more days later by a “boost” dose.

“You add another month, a month and a half, to get that second dose,” Fauci said. “So that’s the reason why I have been projecting that by the end of the year, by November, December, we will know whether we have a safe and effective vaccine.”

With two other vaccine candidates also ready to be trialed in September or October, Fauci said “we’re optimistic that we will be successful with one or more, and that will likely start taking place by the end of the calendar-year 2020.”

But asked whether there would be a vaccine by November 3, he said he thought that’s “unlikely.”

“The only way you can see that scenario come true is if that there are so many infections in the clinical-trial sites that you get an efficacy answer sooner than you would have projected,” he said. “Like I said, it’s not impossible, but it’s unlikely that we’ll have a definitive answer at that time. More likely by the end of the year.”

Don't Miss it Trump knew the coronavirus was ‘lethal stuff’ however selected to downplay it, in keeping with recordings revealed in new Woodward ebook
Up Next New lockdown for northern England as coronavirus instances surge – BBC Information