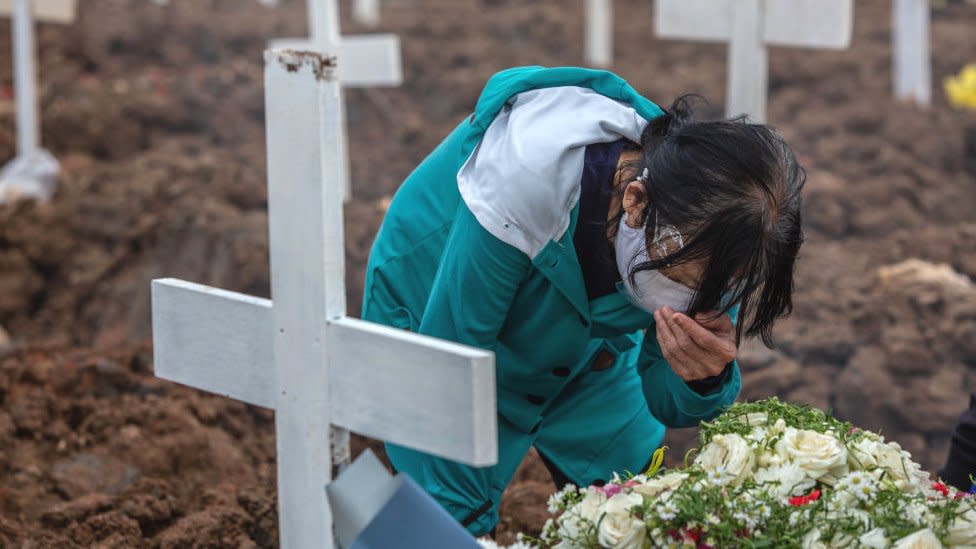 A firefighter hauling the dead from their homes, a lack of access to oxygen and a community banding together during a time of crisis. These are scenes that have emerged from Indonesia, a country currently seeing its worst Covid outbreak so far.

As the new highly transmissible Delta variant continues to ravage the country, Indonesia appears to be facing a worsening crisis.

A firefighter on the Covid frontline

Wirawan is a firefighter in Jakarta – but instead of battling fires, he’s been tasked with handling the bodies of Covid victims.

For the past year, he and his seven teammates – all dressed in full PPE gear – have been responsible for picking up bodies from their homes, tending to the corpses, before finally delivering them for burial.

Many of the dead, he says, died alone – possibly because they were unable to get immediate treatment or were turned away by hospitals.

“Often, [their] neighbours give us a call and say ‘this person hasn’t been seen during their self-isolation’. Then they discover that they’ve died. That’s the [kind of case] we see every day,” he says.

Before the latest spike in cases, he arranged two or three funerals a day. Now he gets calls for up to 24 funerals a day – more than he can handle.

Indonesia’s Covid crisis took a turn for the worse after the Eid holidays in early May, after at least 1.5 million people defied a domestic travel ban.

The quarantine requirements for visitors from abroad were also lax. Indonesia has never stopped international flight arrivals and only recently imposed an eight-day quarantine period, up from the previous five days.

Health experts say it is impossible to control the virus while the country’s borders are still open, though officials maintain that only selected foreigners can enter the country.

Indonesia’s official death toll is now more than 70,000, with around 1,000 people killed by Covid every day in the past week. However, many believe the real toll is much higher.

According to Indonesian independent data group Lapor Covid-19, at least 450 people have died in their homes since June, after they had no choice but to self-isolate due to no capacity at overwhelmed hospitals.

A lack of oxygen

Java, the most populous island of Indonesia, is the epicentre of the country’s outbreak.

On the first weekend of July, 63 Covid-19 patients died in a hospital in Yogyakarta after the hospital ran out of its central oxygen.

The deaths shocked the nation, though the hospital maintained that media reports had over-counted the death toll.

Since then, several hospitals in different cities have had to turn down new patients due to a lack of oxygen supply.

“One hospital [typically used] three tonnes of oxygen in three days to a week; now it’s gone in a day,” says Lia Gardenia Partakusuma, the secretary-general of the Indonesian Hospital Association.

The Indonesian Association of Public Health Experts said the lack of oxygen stemmed from the government’s inability to anticipate a record increase in the number of cases.

Health experts had earlier warned the government that there would be a significant increase in cases due to the holidays.

On social media, people are desperately pleading for help to get oxygen tanks, refills, and hospital beds for their friends and family.

There are long lines outside the handful of oxygen stores that are still open – most are closed because of the shortage.

“Usually, we couldn’t sell out our stock in a day,” says Arif Sofian, an owner of a small oxygen refilling station in Jakarta.

A sign that reads “sorry, out of oxygen” outside an oxygen refilling shop

But as desperation rises, so have the scams.

One resident, Shani Budi, told the BBC’s Outside Source that he was scammed while trying to get oxygen for his mother-in-law.

He found an oxygen supplier and was asked to pay in advance. He transferred 2.5 million rupiah (£124; $172) for five oxygen tanks, only to go ignored by the scammer.

Thankfully, his mother-in-law survived and is now recovering.

A community in action

With a government that’s been criticised for failing to get the situation under control, ordinary citizens are stepping up to the plate to help victims.

A 24-year-old doctor in Yogyakarta decided to start a free telemedicine service – which diagnoses and treats patients, typically over video call.

For Dr Riyo Pungki Irawan, he started the service on WhatsApp after realising that many in self-isolation go unmonitored.

He said that he had received 800 telemedical requests since he announced the free service on 7 July.

“I talked to many patients who have taken self-prescribed medicine they got to know from WhatsApp group broadcasts. So we try to fix that,” said Dr Irawan.

He doesn’t prescribe medication, but recommends what to take and what to avoid during self-isolation.

Djoky wants to help sick people in the community

In West Java, Djoky Haryadi has been going around his neighbourhood on his truck delivering his rice harvest to people in self-isolation.

The farmer also helps them to look for oxygen tanks and vitamins.

“The neighbours don’t care about them because they’re also afraid of the virus. I say we shouldn’t be scared as long as we’re disciplined in wearing the masks and taking other measures,” he said.

Don't Miss it Surgeon Basic, who misplaced 10 members of the family to COVID-19, warns of the hazard of well being misinformation
Up Next DW Information Livestream | DW Information LIVE