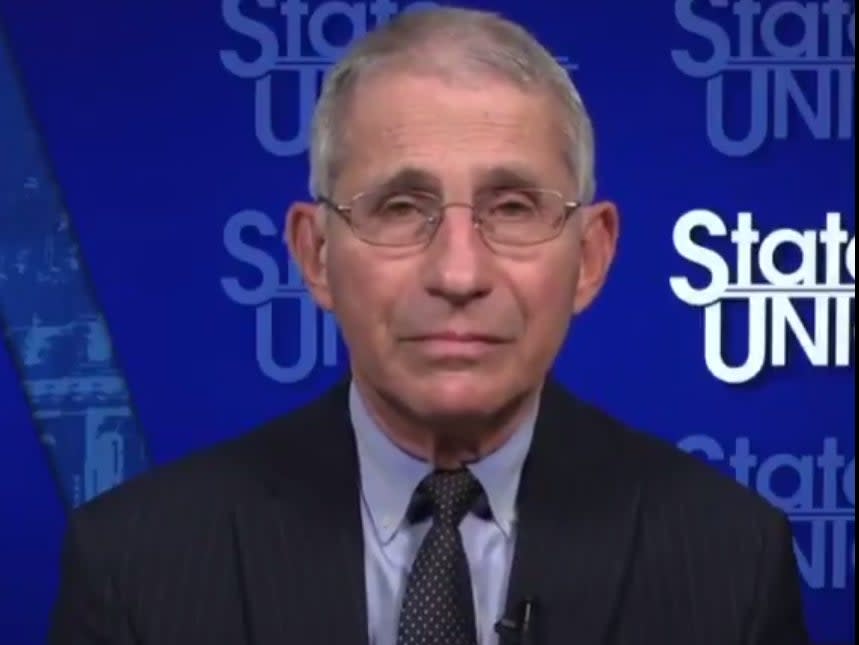 Dr Anthony Fauci talking to anchor Dana Bush during State of the Union on Sunday 27 December 2020.

Dr Anthony Fauci has warned that he believes the worst of the coronavirus pandemic “is yet to come” as December becomes America’s most deadly month for Covid-19.

Speaking to anchor Dana Bash on CNN’s State of the Union on Sunday morning, Dr Fauci, the nation’s top infectious disease expert and part of the White House coronavirus task force, warned US residents to brace for a surge of cases in the new year.

“We very well might see a post-seasonal – in the sense of Christmas, New Years – surge or as I’ve described it, a surge upon a surge,” Dr Fauci said on Sunday.

More than 1.1 million people were screened in airports in America on Saturday, which made it the third busiest day for air travel in the US since March. At least 616,000 people were screened on Christmas day, as thousands more travelled in the days leading up to the holiday.

Health officials, including Dr Fauci, advised US residents against travelling and attending indoor gatherings with people not in their households over the holiday period, and the 80-year-old said on Sunday that those gatherings could fuel a surge in cases in the new year.

When asked by Ms Bash if he thinks the “worst is still yet to come,” of the pandemic, Dr Fauci replied: “I do”.

He added: “If you look at the slope, the incline of cases we’ve experienced as we’ve got into the late fall and soon-to-be early winter, it really is quite troubling.”

Coronavirus cases and deaths have risen dramatically over the last couple of months, and the US recorded its fifth-highest day for related hospitalisations on Saturday, as more than 117,300 Covid-19 patients were hospitalised across the country.

Dr Fauci warned that hospitals are already struggling to deal with the amount of Covid-19 patients and said that “we are really at a very critical point”, before adding: “As we get into the next few weeks it might actually get worse”.

December is already the US’ deadliest month since the start of the coronavirus pandemic, as more than 63,000 Americans died because of Covid-19 by 26 December.

The US recorded 225,818 new cases and 1,645 more deaths on Saturday, as the country could record close to double November’s 36,964 fatalities by the end of the month.

However, Dr Fauci was optimistic about the status of the US vaccinations programme during his appearance on CNN, as he said the country is on track to administer doses to healthy US residents by April 2021, despite being far behind its December goal.

The US aimed to administer 20 million doses by the end of December after the Food and Drug Administration (FDA) approved two separate coronavirus vaccines earlier in the month, but has so far only given 1.9 million to high-priority residents across the country.

“Whenever you roll out a large programme that’s a comprehensive vaccine programme with a brand new vaccine like this, in the beginning it always starts slow and then starts to gain momentum,” Dr Fauci told Ms Bash on Sunday.

He added that he believes the rollout will gain momentum and “we’ll catch up with the projection that by the time we get to April, mid-late April, you’ll have taken the high-priority people and already accounted for them and then anyone can get vaccinated”.

According to Johns Hopkins University, there are now more than 19 million people who have tested positive for the coronavirus in the US. The death toll has reached 332,145.

Don't Miss it Hit arduous by COVID-19, some tribal members are hesitant to get a vaccine
Up Next WHO chief warns that COVID-19 will not be the world’s final pandemic as he tells international locations to arrange for future emergencies