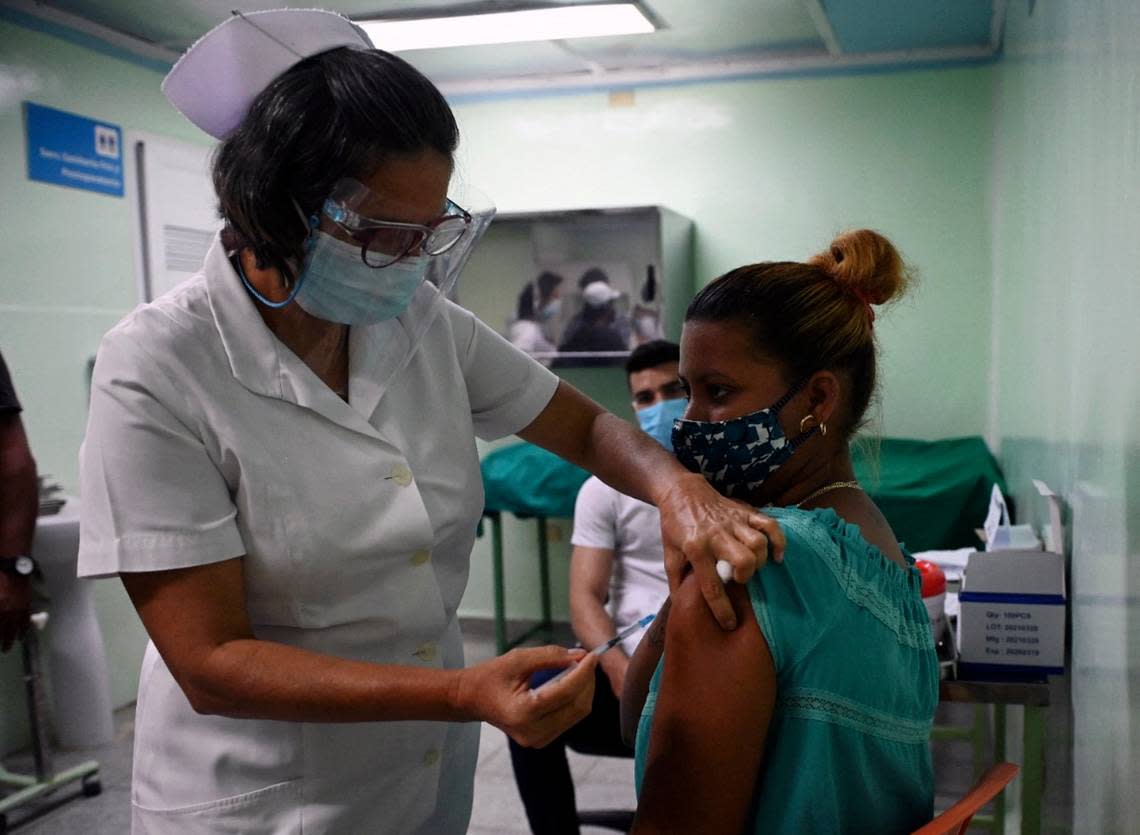 Cuba said its Soberana 02 and Abdala coronavirus vaccines, two out of its five candidates, have shown high efficacy rates against COVID-19 as the island’s bet on a homegrown solution begins to bear fruit.

BioCubaFarma, the government-owned pharmaceutical company, said late Monday that its three-dose Abdala vaccine candidate had an efficacy rate of 92.28% in phase III of clinical trials, while the state-run Finlay Institute of Vaccines said its Soberana 02 had completed phase III trials with an efficacy rate of 62% after two out of three recommended shots. The vaccines are already being administered even before receiving certification from local authorities, after a spike in cases led the government to launch an emergency intervention last month.

Cuban leader Miguel Díaz-Canel celebrated the achievement on social media, lauding Cuba’s scientific community for its sacrifice in the face of challenges posed by the U.S. embargo.

“The success of Soberana 02 and Abdala is yours. Thirteen months ago I asked our scientists to give us a sovereign answer to COVID-19. They didn’t give us just one, they gave us five answers. Two are already vaccines and we are going for more,” he wrote on Twitter, adding the hashtag #CubaSalvaVidas — Cuba saves lives. “That victory is only comparable to the size of our sacrifices.”

Cuba has five candidates at various stages of trials as it opted to produce its own vaccines rather than be forced to compete with richer countries for shots. From the beginning, Díaz-Canel said guaranteeing the nation’s sovereignty was the main goal of producing a homegrown vaccine, so much so that the first candidate was named Soberana, Spanish for sovereign. Abdala was named after a poem by independence hero José Martí, and a third candidate is called Mambisa, the word for 19th Century insurrectionists in the fight against Spanish rule.

While the island has an established biotech industry and produced the world’s first meningitis B shot, for instance, some say the politicization of its COVID-19 vaccine program and a lack of transparency and data about the trials are cause for concern. Cuba hasn’t provided any information about its vaccines to the World Health Organization, even though Díaz-Canel said the island would sell its shots to Latin American countries. Argentina, Mexico, Venezuela, Bolivia and Vietnam, among other countries, have expressed interest in buying Cuban vaccines, and Iran began production of Soberana as part of clinical trials. The island pledged to produce 100 million shots this year but hasn’t defined a vaccination production schedule.

“There are a lot of unanswered questions about Cuba’s vaccine program, and the fact that neither the labs nor the government has shared much information about these vaccines makes me wonder if these efficacy numbers are real,” said Andy Gomez, a Cuba scholar and former senior fellow at the University of Miami’s Institute for Cuban and Cuban-American Studies. “If the vaccines are that good, why not share the data with the world?”

The World Health Organization set up a COVID-19 vaccine tracking system to compile detailed information about each candidate in development by closely monitoring its progress as part of an effort by the global scientific community to share data and to facilitate approvals at a global level. Cuba is listed with three Soberana shots — 01, 02 and Plus — and Abdala, but the WHO table says: “Awaiting information on strategy and timelines for submission.”

Details about the vaccine candidates being tested are scarce on Cuba’s Health Ministry’s trial registry system, but the information provided so far shows they are all protein-based, in which a type of protein located on the virus “spike” is used to induce neutralizing antibodies, basically teaching the immune system to fight off the virus. The technology has been previously used in other vaccines. They are easier and cheaper to produce, and that must have been a key consideration for the socialist island as it faces a severe economic crisis that’s influencing its ability to buy materials. Both the Soberana and the Abdala vaccines require three doses, but Cuban authorities said the Soberana does protect against serious disease and death after just two doses.

Soberana’s 62% efficacy rate is above the 50% threshold required for approval by regulators and health agencies worldwide, including the WHO. Abdala’s 92% rate would make it almost as effective as Pfizer–BioNTech’s 95% during late-phase clinical trials. But Abdala requires three doses, and it’s unclear how fast Cuba will be able to produce its shots as it races to immunize at least 70% of its population by the end of the summer.

The refusal to purchase other vaccines to inoculate its population while it developed its own put Cuba in a vulnerable position after it reopened its borders for tourism in late November. Until then, the island had done remarkably well in controlling transmission through strict lockdown measures and an efficient prevention strategy led by its public health system. In a country of 11 million, fewer than 12,500 cases were registered last year.

But as tourists began flying to the island earlier this year, bringing much-needed cash and helping reignite Cuba’s moribund tourism sector, new and more contagious COVID-19 variants also arrived. Now Cuba is facing the worst COVID-19 wave since the start of the pandemic, with 1,561 new COVID-19 infections reported on Monday, the highest daily number ever. Nearly 170,000 cases have been confirmed so far, while 1,170 people have died, according to Public Health Ministry data.

Cuba and the Dominican Republic are driving most new cases in the Caribbean, and the rate of infections in Cuba is only slowing slightly in Havana, where authorities say two million people have received at least one shot of a vaccine. The Pan American Health Organization warned that the pandemic won’t subside if these countries don’t scale up vaccination, but Cuba hasn’t accepted vaccine donations that are expected to reach Latin American and Caribbean countries from the Group of Seven. Leaders from these rich nations have pledged one billion COVID vaccine doses for countries in need around the world.