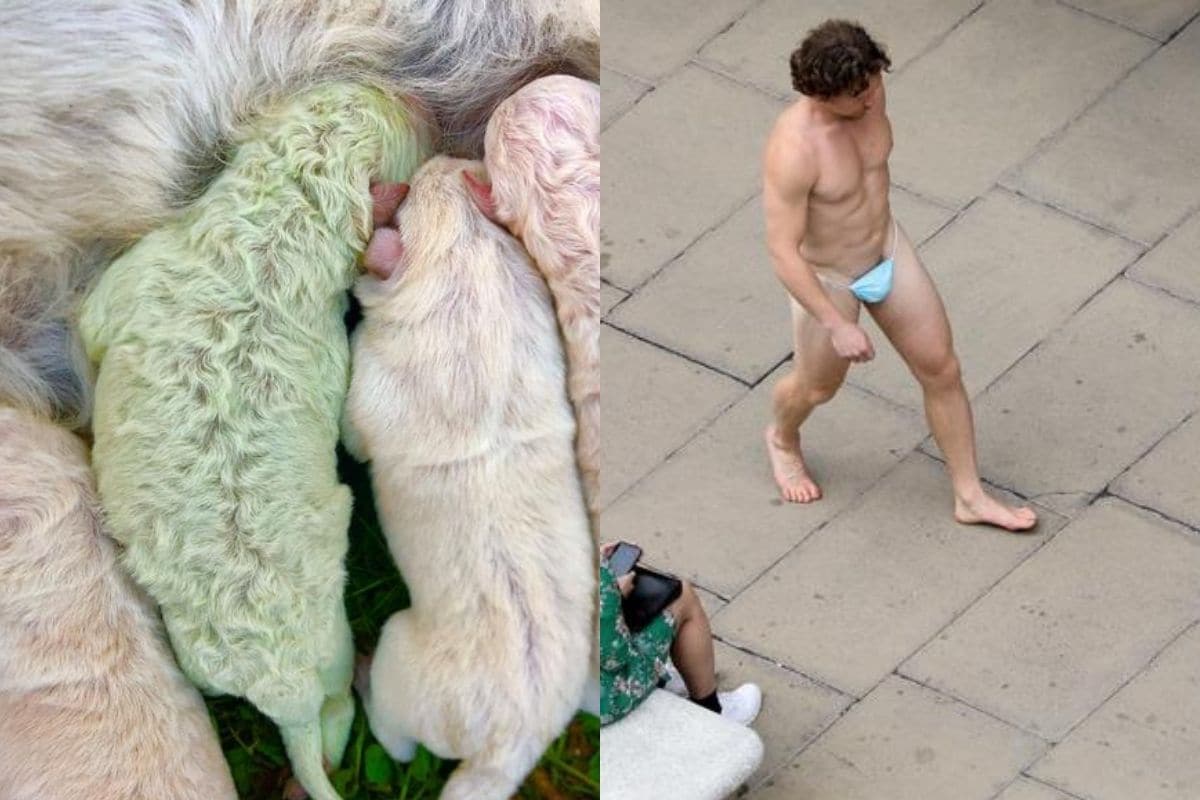 Police officer Rajesh Babu wears a helmet depicting the coronavirus as he requests a commuter to stay at home during a 21-day nationwide lockdown to limit the spreading of coronavirus in Chennai, India. Photo: Reuters

A man strolled down central London’s most popular shopping street in July with only a mask to cover his nudity, leaving passers-by astounded, amused and shocked. Photo: Reuters

While the world grappled to deal with the coronavirus pandemic, millions of healthcare workers fought from the frontline. A nurse rests during a night shift at a hospital in Cremona, Italy in March. Photo: Reuters

Italian farmer Cristian Mallocci could not believe his eyes when Spelacchia, one of his eight dogs, gave birth to a green-furred puppy. The tiny dog, immediately named Pistachio, was part of a five-dog litter born on Oct. 9, all with white fur, the same colour as their mixed breed mum. Except him. Photo: Reuters

Canada’s Prime Minister Justin Trudeau wears a mask as he takes a knee during a rally against the death in Minneapolis police custody of George Floyd, on Parliament Hill, in Ottawa, Ontario, Canada. It marked a rare public outing for the Canadian leader since the start of the COVID-19 pandemic, as protests spread outside the United States after police in Minnesota killed an unarmed black man. Photo: Reuters

In March, Saudi Arabia officially ceased travel to the Islamic pilgrimage sites of Mecca and Medina amid a global coronavirus, eerie videos of the empty Kaaba have been going viral on social media. As the Middle East reported rise in deaths caused by the COVID-19 outbreak, the Saudi government has decided to disallow all travellers from entering the holiest of Islamic sites, months ahead of the annual 10-day pilgrimage of Hajj. Photo: Reuters

People participate in an outdoor yoga class by LMNTS Outdoor Studio in a dome to facilitate social distancing and proper protocols to prevent the spread of the coronavirus, in Toronto, Ontario, Canada. Photo: Reuters

A resident kisses a relative through a plastic sheet installed in a special ‘hug room’ organized to keep both parties safe from the coronavirus, at a care home in Castelfranco Veneto, Italy, in this handout photo released on November 11, 2020. Photo: Reuters

The United States President lawyer Rudy Giuliani was in for a rude shock on Thursday when his blah hair dye melted and stripped down the side of his face while he addressed the media last week. Photo: Reuters

Don't Miss it Rich New Yorkers are hiring folks to face in coronavirus testing strains for them
Up Next Coronavirus: Trump claims recommendation to inject disinfectant was simply "sarcasm" – BBC Information