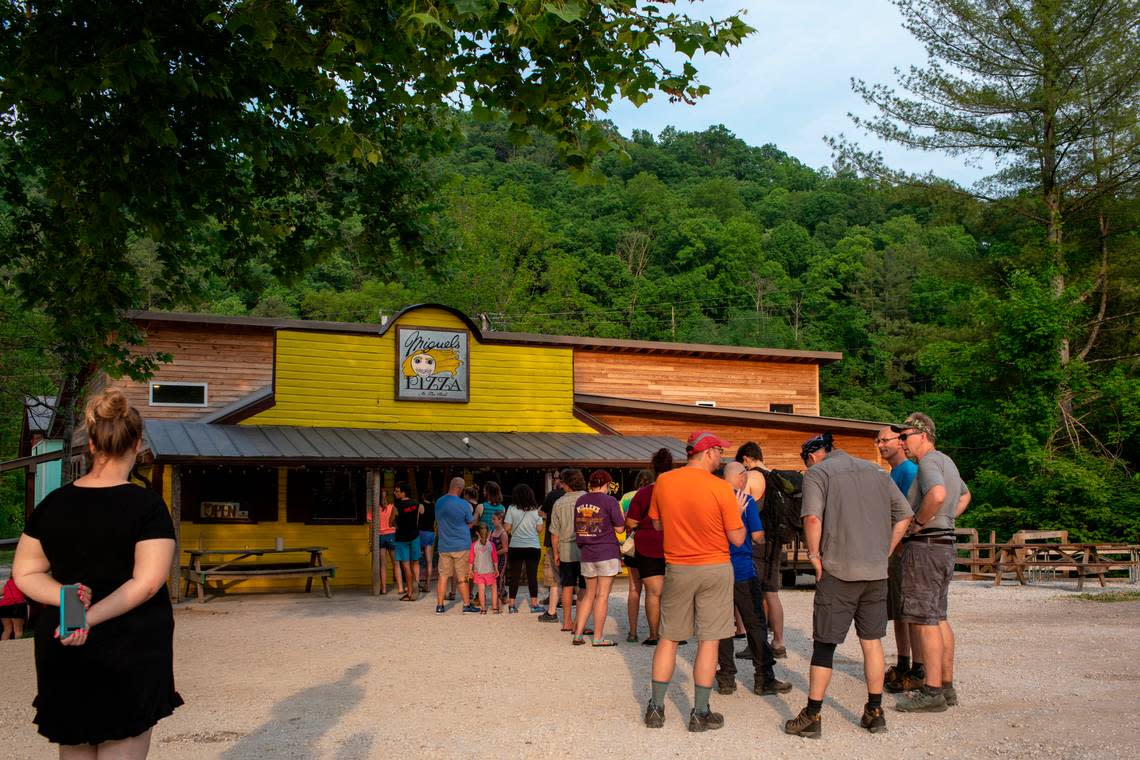 In the early days of the coronavirus pandemic in March and April 2020, the financial outlook seemed bleak at LakePointe Resort near Lake Cumberland.

People worried about the virus were canceling reservations, and there were few bookings coming in for the traditional summer tourist season because of uncertainty about traveling, said Tina Begley, who operates the Russell County resort with her husband, Barry.

They applied for a low-interest loan through the federal Small Business Administration to make sure they could stay afloat.

“We were concerned,” Begley said this week.

But as “social distancing” became a key concern, people figured out the lake had plenty of room for a vacation away from other people. Visitors flocked to marinas, cottages and campgrounds.

The resort had its biggest season ever and ended up not needing the loan.

“We were getting people here who were supposed to be on cruises,” said Begley, whose resort has 10 cabins and a 12-room motel. “We were just busy all summer.”

With travel worries, limits on tour sizes and cancellations of concerts, conventions and sports events that bring visitors to distilleries, the number of tours plunged from more than 1.7 million in 2019 to 587,307 in 2020, according to the Kentucky Distillers’ Association.

It was the first time in the 21-year history of the Kentucky Bourbon Trail that attendance went down.

“2020 was a devastating year,” said Eric Gregory, president of the distillers’ association.

This year, as the summer tourism season approaches, the outlook for the state’s travel and hospitality industry is looking up overall.

But while some sectors expect a busy year, others don’t anticipate a full recovery in 2021.

Tourism, which created an economic impact estimated at nearly $12 billion in 2019, was a tale of two Kentuckys last year in many ways.

Outdoor recreation and tourism, such as boating, fishing and hiking, did well after a couple of shaky months early in the pandemic and helped dampen the blow of the pandemic, according to business owners and tourism officials.

Visitation and tourism that is dependent on being indoors suffered, however.

But some attractions around the park where people could get outside did well last summer, said Sandra Wilson, head of Horse Cave — Hart County Tourism and president of the Caveland Marketing Association, which covers Barren, Edmonson and Hart counties.

The Kentucky Down Under Adventure Zoo in Hart County, for instance, had a record year, she said.

With conventions in larger cities shut down and people worried about flying or going to cities or crowded beaches, many people were looking for family-friendly, outdoor attractions in more rural areas, and Kentucky fit the bill, Wilson said.

“People were looking for things to do. This was a horrible situation that kind of had a silver lining to it,” Wilson said.

Lodging in Lee County, which gets visitors who come to hike and climb in the gorge, had its best year since local officials began tracking room-tax receipts in 2012, said Dedra Brandenburg, the tourism director.

And with many parents working remotely and kids attending school virtually, many families booked cabins for a week instead of a weekend, Brandenburg said.

The area also had more visitors from the South than usual, apparently choosing the gorge over a trip to the beach.

“We had a boom,” Brandenburg said.

At state parks, where restaurant capacity restrictions were in force and rooms at some parks were blocked off for a time, occupancy rates and food sales were down from 2019, but sales at park golf courses were up 22 percent, said Mike Berry, secretary of the state Tourism, Arts and Heritage Cabinet.

J.D. Hamilton saw the difference at his Lee’s Ford Resort Marina on Lake Cumberland near Somerset, which includes the Harbor Restaurant & Tavern.

“Our restaurant — terrible. Marina — insane,” Hamilton said. Except for the restaurant “it was a record year.”

Also helping many outdoor tourism attractions was the fact that many other activities, such as youth sports, were canceled, leaving families with more time.

The Kentucky Lake area saw visitation in September and October 2020 that it usually doesn’t get after school starts, said Elena Blevins, executive director of the Kentucky Lake Convention and Visitors Bureau in Marshall County.

“We ended up being fine, which was not the case for everybody,” Blevins said.

Statistics on visitation and tourism spending statewide last year aren’t yet available, but officials said hotels, motels and restaurants — particularly those without drive-thru windows or a big carry-out business — were hit hard.

Restaurants in Kentucky lost $550 million in sales in April 2020 alone, according to a survey by the National Restaurant Association.

In March of this year, 55 percent of Kentucky restaurants said sales were still lower than they would have been without COVID-19, according to another survey.

No sector “was devastated as much or more than restaurants,” said Stacy Roof, president and CEO of the Kentucky Restaurant Association.

Lexington, Louisville and Northern Kentucky suffered in particular because of the loss of conventions.

Bill Owen, president and CEO of the Central Bank Center in Lexington, refers to March 12, 2020, as the day the Earth stood still.

That’s the day officials concerned over the potential to spread coronavirus halted the girls’ state basketball tournament after several games had already been played.

It was the first in a wave of cancellations of events that together bring tens of thousands of people to downtown Lexington in a usual year — the boys’ state basketball tournament, the Central Kentucky Home and Garden Show, Lexington Comic-Con, shows at the historic Lexington Opera House.

A group of friends from Logan, West Virginia, dressed as Sailor Scouts from the Sailor Moon series, posed for a photo during the 2019 Lexington Comic & Toy Con on Saturday, March 23, 2019.

Occupancy at Lexington hotels and motels in April 2020 — when the city lost the Keeneland spring racing meet — was just 16 percent, compared to occupancy rates above 90 percent a year earlier, said Mary Quinn Ramer, president of VisitLEX.

There were other headwinds throughout the year. The Railbird Festival, a music festival at Keeneland, was canceled. When University of Kentucky basketball finally resumed at Rupp Arena at Central Bank Center in November, coronavirus safety guidelines limited the number of fans.

“2020 was absolute devastation for the hospitality industry in Lexington,” Ramer said.

Things were no better in Louisville, where conventions and meetings also play a key role in the tourism economy.

In 2019, the city hosted 713 groups which created an economic impact of $526 million, according to Karen Williams, president and CEO of Louisville Tourism.

Things are looking up

There are encouraging signs for Kentucky tourism these days, however.

Visitation at lakes and other outdoor attractions continued to be good even before the Memorial Day weekend, and festivals, concerts and other events are returning, which should help going forward, officials said.

In Somerset, for instance, the Master Musicians Festival, which was canceled in 2020, will return this July, and Foodstock, which features food trucks, drink vendors, music and art, is back on as well, said Michelle Allen, head of the Somerset-Pulaski County Convention and Visitors Bureau.

“I think this year’s gonna be one of our best” around Lake Cumberland, Allen said. “People are itching to get out.”

Gov. Andy Beshear announced that capacity restrictions at restaurants and most venues will be lifted June 11, which local officials said will also help.

Berry, the state tourism secretary, said a national survey by the U.S. Travel Association showed that 72 percent of people say they plan a summer vacation this year, up from 37 percent last year.

Many people are still leery of flying, so road trips will be key to travel. Kentucky is likely to benefit because it is within a one-day drive of two-thirds of the U.S. population, Berry said.

Safety remains a key concern of travelers, and that will also benefit the state because it is seen as a safe destination with lots of outdoor opportunities, Berry said.

Occupancy at hotels and motels in the state so far this year is 25 percent ahead of last year, Berry said.

In Lexington, the Railbird Festival is back on in August; the Lexington Opera House scheduled a total of seven shows for its 2021-22 season; the Central Bank Center has four events scheduled in June, including a Lutheran Women’s Missionary League convention expected to bring in 2,500 people; and Rupp Arena has several concerts scheduled.

It would help in the effort to rebuild tourism if the state would provide money to organizations such as VisitLEX that they could use for marketing to regain business and attract new visitors, Ramer said.

Beshear has requested $100 million — out of the $2.1 billion in federal recovery money coming to the state — to help tourism marketing and the hospitality industry, Berry said.

Legislators would have to approve that.

Beshear has announced several million in spending for additional tourism marketing from other federal aid, however.

Ramer said Lexington, and Kentucky, won’t fully recover from the swoon in tourism last year until group meetings return. It will likely be 2022 before the state gets back the number of meetings and conventions it had before the pandemic, she said.

“There are lots of very positive indications,” she said.